The forward, who was named alongside Dickinson's Ward Van de Water, scored three times in a pair of contests for the Bears. He tallied two goals in Wednesday's 4-3 loss to Arcadia before netting the game-tying marker late in the second half of Saturday's 1-1 draw with Susquehanna.

Burns' three goals this season are tied for second in the CC. He is a first-time winner of the conference's weekly award. Van de Water tallied a pair of go-ahead goals in a wild match on Friday night that saw nationally-ranked Lynchburg escape with a thrilling 4-3 win. The senior tallied the lone goal on Saturday, hitting a well-place strike under the crossbar to lead the Red Devils to a 1-0 victory over Roanoke College.

DEFENSIVE PLAYER OF THE WEEK 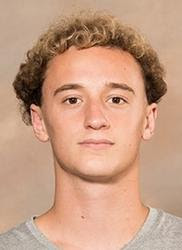